Back in January of this year my cousin (in law) Matt and I made a road trip out to Cleveland to catch the Cavs-Spurs ABC primetime game.

The trip out was easy enough, and we absolutely love to chat with topics ranging from the GOP and Democratic election cycle to sports to how to solve the world’s problems, none of which we seemed to actually fix during the trip.

We made it out to our hotel, which was a bit out of the city to save some $$$. While waiting to make the trip in for the game we caught an ESPN 30 for 30 documentary on Sam Bowie, who was the player drafted in front of Michael Jordan in the 1984 NBA draft. Bowie was an exceptional player in college for the University of Kentucky, but suffered a severe leg injury that went on to plague him for the rest of his basketball career, and the rest is history as far as Michael Jordan goes.

After the documentary we headed into the city to walk around for a bit and find some grub. Driving into the city wasn’t nearly as bad as I had anticipated and we made it into a parking garage (more on that later) easily enough. After cruising the streets for a while with not much likely finding a restaurant that wasn’t packed to the gills, we settled on Chipotle – putting our lives into our own hands, but we emerged unscathed.

We got into the game easily enough, especially now that they have the mobile phone scanners. We got there about an hour or so before tipoff, so we got to catch all the warming up, pre game activities and of course the player introductions. The Cavs have a system that projects onto the floor, which is fascinating to me. And a scoreboard that “breathes” fire. Video to follow.

Fortunately for me and unfortunately for Matt, the Cavs ended up winning the game. So we made our way back to the car, at about 11:00 or so at night.

And then it got interesting. Matt went to start the car…and…nothing. Zilch, nada. That baby wasn’t gonna start for anything. So here we are in Cleveland, a half hour from our hotel with a car that’s completely dead. Matt contacted the attendants at the bottom of the garage who weren’t any help. Fortunately we were able to do some Googling and found out that the city actual provides a service that will jump your car in just such an instance. So we waited for the technician to show up. Right before the guy showed up, the girl next to us actually showed up and was gracious enough to give us a jump. A few minutes later we were off and back to the hotel.

A memorable experience all the way around, with great company to boot!

Some pics and footage from our trip. 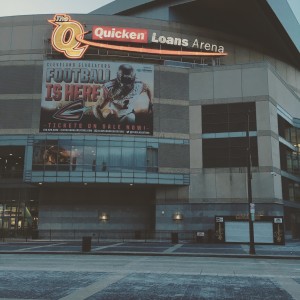 Outside shot of “The Q” 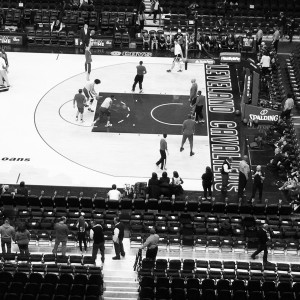 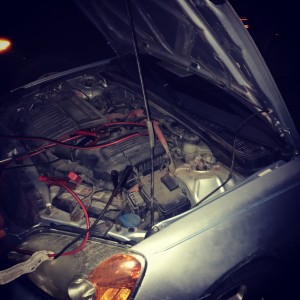